To be be amazing at storytelling you need to see past trends, past what people are doing right now.
May 30, 2021

What does it take to be a great digital storyteller? Shini Park, the creative force behind CUBICLE, a platform championing masters of visual arts, talks us through her extraordinary life and career.

When I call Shini on Zoom, there’s a Maldivian beach in the background, big ocean waves and a palm tree swaying behind her in the wind. It turns out she’s not actually on a fabulous vacation — the digital pro that she is, she turned on a filter just for the fun of it. In fact, she’s in her house in Konstancin–Jeziorna, a suburb of Warsaw where she lives with her husband Maciek and their new puppy Banana. What makes Shini stand out from the fashion crowd is her dry, sarcastic sense of humour. – I learned that from you, the Polish people – she says.

Maja von Horn: You were born in Seoul, South Korea, but grew up in Warsaw, Poland. When did your family move here?

Shini Park: My parents left South Korea when I was one, and we first moved to Vienna. They’d been planning to move to Warsaw because of my father’s job at an electronics company, but back then Poland was still a communist state, so they waited in Vienna for the political situation to change. We moved to Poland right after communism fell, in 1990, when I was three years old. We were meant to stay in the country for five years, and we did move back to South Korea after that time. But I couldn’t cope at Korean school, and my parents had already fallen in love with Poland, so we packed our things and went back to Warsaw.

S.P.: No, I can get by, but not enough to have a fun conversation. I wish that as a kid I had a reason to learn Polish better, but I kept going to American and British schools in Warsaw and Konstancin, so I never really had a need to learn the language. My husband is Polish, but I don’t speak it well enough to have a personality in this language.

M.v.H.: After high school you went to London to study graphic design at Central Saint Martins.

S.P.: Yes, and I stayed in London for 12 years. After that, we decided to embark on a new chapter and moved to Copenhagen for another two years. And when the pandemic started, we went back to Poland, and decided to stay here until things got better again.

M.v.H.: When did you start your digital storytelling journey?

S.P.: I’ve been a web designer since I was 17 years old. I would design websites for clients in The Netherlands, I was always online. We were [working] on dial-up back then, so my parents hated the fact that I was using the internet so much.

M.v.H.: How does one become a web designer at 17? Where did the fascination come from?

S.P.: I remember that when I was 13, I made a Britney Spears & Christina Aguilera ‘magazine’. I downloaded all the images (this alone took days), and printed it all out on our poor inkjet printer. When I was 15-16, the internet was still a new thing. I was also itching to make fan sites for Christina Aguilera, so I used the then-limited internet as a resource to self-teach myself web design and development. I learned how to code and how to design for the web long before I started studying graphic design at Central Saint Martins.

M.v.H.: What inspired you to start your fashion blog Park & Cube?

S.P.: I was still in uni, but my online friends were all from LiveJournal, a journaling/blogging platform that was hugely popular back then. So it was only natural that I started a blog soon after – Park & Cube was a coming-of-age product. And when you have a blog, you have to photograph. I kept buying new lenses, constantly upgrading. My photography career was developing along with my design career, that’s how I grew.

S.P.: I guess I have a need to do things on my own. When you live in a country that is not your own, you always have to rely on yourself. I’m also very introverted, and always found solutions that helped me avoid speaking to strangers, especially as a shy teen.

M.v.H.: Was it London that inspired you to make it about fashion?

S.P.: It was more about style than fashion. I don’t really care much about the fashion industry. I care about taking something as a subject and telling a story around it. So I would take a pair of gloves and go to a factory where they were made to show the craft. It was all about journaling, scrapbooking. Photography played a big part, but so did writing.

M.v.H.: Ten years later, in 2018, you launched CUBICLE – an online platform and an annual magazine. Have you been dreaming about print since your Britney Spears & Christina Aguilera years?

S.P.: No, not really. I started making money from Park & Cube after five years of doing it…

M.v.H.: So it became your full-time job?

S.P.: Until then I had a full-time job as a design art director for an online platform. Then one day my boss just disappeared, and so did my job. So I had to ask myself: do I need to find a new job, or can I make this blog work as a full-time job? We decided with my husband that I’ll give it a go and try to live off it for three months, see if it works. It turned out to be very successful, and so I started full-time blogging, making a living out of partnerships and sponsorships, photographing for different companies. But after nine years I got so sick of it, I gradually stopped posting. That was a natural end of it. I felt like I needed to start something new, to try to bring back the innocence that I had ten years ago. That’s how I launched CUBICLE, a big sister to Park & Cube. It was my personal metamorphosis. I thought, “I learned so much in the past ten years, let me give back what I learned.” I launched it on the 10th anniversary of the launch of the blog. I also archived the blog, so that I could never go back to it again. CUBICLE was meant to be a digital platform, I didn’t originally aim for a printed version. We decided to print editor’s notes in the form of a booklet for the launch party, but we ended up loving the process so much that we made a magazine out of it. Now it’s an annual hardcover book, printed in Krakow, and produced worldwide with my London-based team.

S.P.: We’re seven people. Most of them are in London, some are scattered across the US and South America. It’s a global team, which turned out to be very helpful in the pandemic era. I hired our graphic designer many years ago, and he turned out to be amazing at storytelling. He’s now the art director of CUBICLE and of CUBE Collective, which is an umbrella agency that holds CUBICLE, my personal work, as well as all the clients’ work.

M.v.H.: What does it take to be “amazing at storytelling”?

S.P.: It’s the ability to see past trends, past what people are doing right now. When you think of fashion editorial or fashion storytelling, you think of glossy magazines. There, it’s all about politics: advertisers, who’s hot right now, who should be featured. Our art director comes from an art history background, so CUBICLE’s identity is all about referencing the masters of visual arts – architects, painters, sculptors, photographers. We take Helmut Newton or Horst P. Horst and we refer back to them. We make the fashion and everything else in the magazine work for that story, instead of the other way around. I’ve always treasured craftsmanship, and the craft in a story comes from history and context. I don’t want to make anything that is out of context. The minute you have a little bit of politics [in a magazine], that changes.

M.v.H.: CUBICLE is ad-free. How do you make that happen?

S.P.: This is something I’m very proud of. We’re subsidising it from other parts of the business, like the agency, as well as my “influencer” work (I hate that word, by the way).

M.v.H.: What does the CUBE Collective do?

S.P.: I founded it in 2015 to manage all my freelance projects aside from blogging – web design, branding, etc. Now we produce everything that has to do with CUBICLE, but we also have a lot of returning clients, such as Ferragamo, and produce digital content for them. We also have a lot of branding clients. I like to think of it as a 360-degree solution company - we do not limit ourselves to digital production – if a client wants a pop-up store in London’s Soho or a beer garden in Berlin, we deliver. 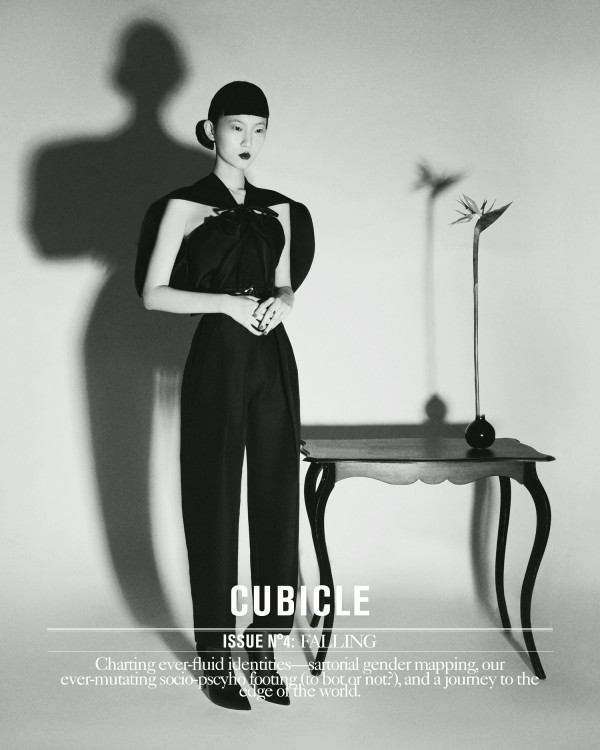 M.v.H.: Does your style change depending on where you live?

S.P.: It changes a lot, and I think it has to do with whether I have a car or not. In London, when I was young and crazy, it was all about layering, Susie Bubble style – very colourful, dots with stripes, etc. It was only possible because it was London, where nobody cares what you’re wearing. That’s where I fell in love with the idea of using your clothes to express your personality. In my early twenties I’d wear heels every day, even if I was going to uni with a super heavy bag with art supplies.

When I moved to Copenhagen my style became completely minimal. Everyone wears sneakers there, and so did I. In Poland I drive a lot, so I wear heels again, but nothing too high, like platforms. Fashion is a way of introducing another layer of language. Especially in Poland, since I don’t speak the language well, I can communicate a lot with what I’m wearing – through clothes I can show that I’m funny, or that I want to be taken seriously. In Copenhagen everyone speaks English, so there’s no need to do that.

M.v.H.: You seem to cherish your Chylak handbags, what do you like them for?

S.P.: I was so impressed with the brand, thought it was one of the best things to come out of Poland. For me branding is almost as important as the product, and with Chylak the two things go together at the same level. The brand stayed in my mind longer because of the amazing branding and art direction. That’s the power of storytelling.

M.v.H.: Was it ever challenging for you to grow up in Poland?

S.P.: Poland is my home. I grew up in Wilanów, in an expat community, went to international schools, always spoke English with everyone. That’s obviously not very representative of the whole country. I didn’t have to struggle to survive, as many immigrants do in a third-culture place. The only thing was that I looked very different from everyone else. But I never got bullied, never had any race-related issues that would leave any scars. We feel incredibly at home here.

M.v.H.: Do you go to South Korea sometimes?

S.P.: Yes, and it’s like going to Disneyland. I like to go for three days and have as much fun as possible. There’s amazing nightlife there. Things just never close, you go to bars, then clubbing, then straight to breakfast at five in the morning. And then I like to go back home.